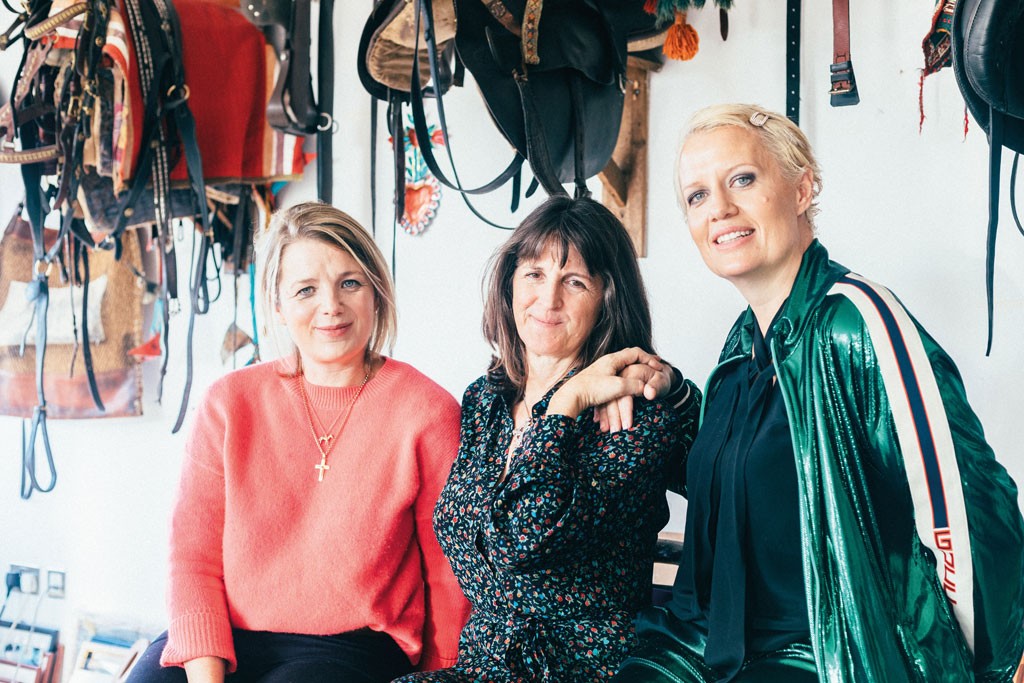 It was with shock and sadness that I learnt of Nell Gifford’s death in December because just two weeks earlier I had interviewed her with her sisters, Emma Bridgewater and Clover Stroud, at her Gloucestershire home, Fennells Farm.

I arrived on a sparkly winter day with grass crisp underfoot. Though clearly tired, Nell looked radiant. The atmosphere was festive and happy, as the sisters looked forward to spending Christmas together. They were being interviewed and photographed together for the first time. No-one foresaw it was also to be the last, and in celebration of Nell’s life, I hope I have captured a sense of her adventurous, creative spirit and of the love between the three sisters, which tenderly enfolded the entire day.

Fennells Farm is also home to Giffords Circus so I begin with a tour of the outbuildings that house all the magical paraphernalia, from wagons to wigs. I feel I already know the sisters: I have taken my children to Giffords Circus for as long as I remember, Emma Bridgewater ceramics grace my kitchen shelves and I read The Wild Other, Clover’s memoir, with breathless admiration.

The sisters were devastated in 1991 when their mother Charlotte, aged 52, fell off a horse while hunting and went into a coma. Emma was 31, Nell 18 and Clover just 16. Though Charlotte emerged from the coma, she was never fully to recover and died in 2013.

The sisters naturally struggled with profound emotional distress and pain. Yet the accident galvanised rather than paralysed them. All have had children (Emma four, Nell twins and Clover five). Emma built her eponymous ceramics brand into a global success story. Clover ran away to Ireland with the gypsies, then worked in Texas as a cowgirl and rode in rodeos before turning to writing. Nell didn’t just run away and join a circus but started her own, Giffords Circus, which has become one of England’s most-loved summer events. 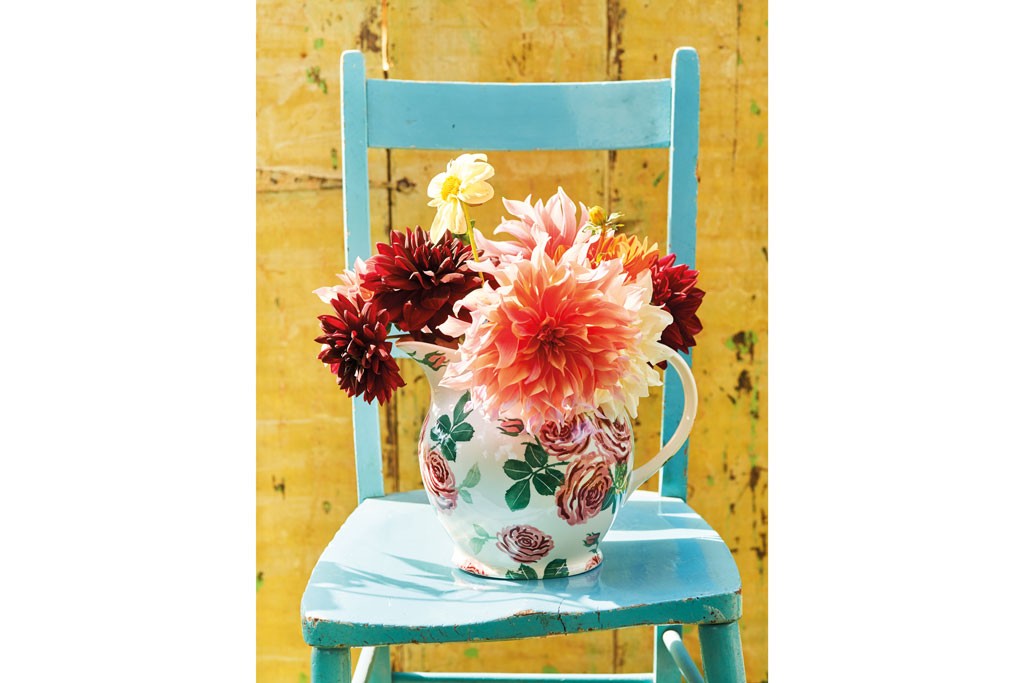 I start by asking which sister is most like Charlotte. ‘Clover,’ says Emma without hesitation. ‘Just like her in looks and character – so emotional and headstrong.’ Emma grew up largely in Oxford with her two younger siblings, Tom and Sophy, by Charlotte’s first husband, Adrian Bridgewater. After she separated from Adrian, Charlotte fell in love with Rick Stroud, a student at Oxford. In time they had Nell and Clover and moved to Minety in Wiltshire. Wherever home was, Charlotte created a happy – if chaotic and bohemian – haven.

‘Sitting round a big table with lots of family is really important for all of us,’ says Clover. ‘It never mattered how many people turned up as there always seemed to be vaguely enough food. Mum was the opposite of Instagram. She would never pose or set out to be stylish.’ ‘With Mum it always seemed effortless and easy,’ says Emma. ‘She never did anything for effect and would much rather be talking, riding or gardening than cleaning the house. If the girls cantered all over her garden and messed up the lawn she didn’t mind a bit. She instinctively built a life full of lunches, picnics and big messy breakfasts with her children at the centre. We all loved being in the amazing circus of a life she made.’ 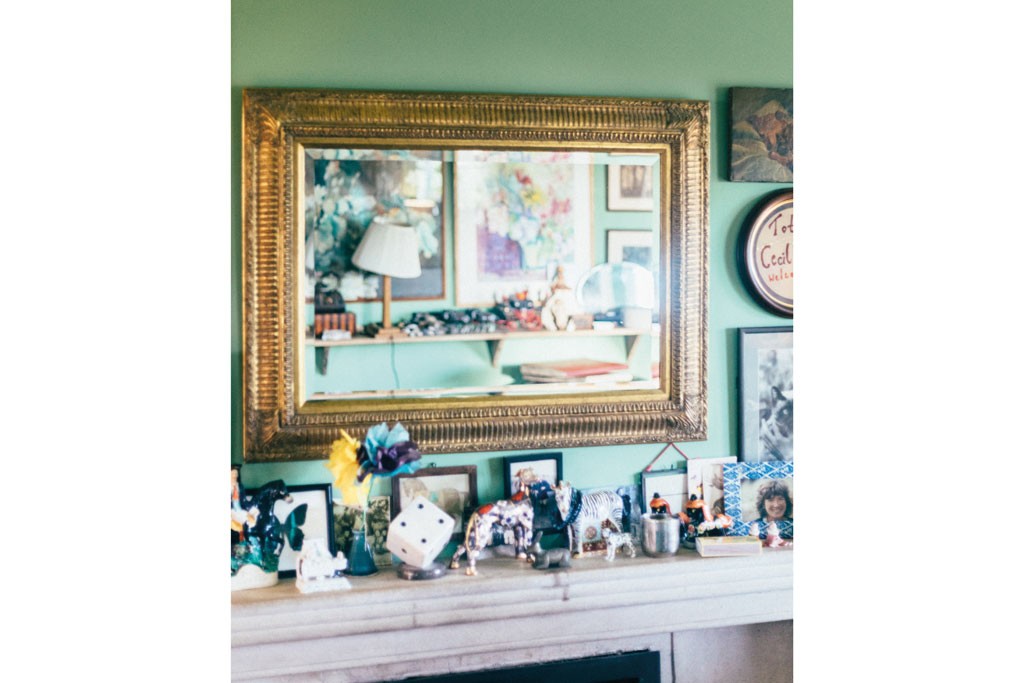 They collectively agree Minety was ‘bliss’, though conventional outsiders might not always have approved. ‘We were pretty much allowed to roam free,’ laughs Nell. ‘We were always outside on our ponies or driving them in a horse and cart,’ adds Clover. ‘We borrowed each other’s clothes and probably looked quite weird in corduroy trousers and stuff. We were like overgrown children – Mum was trying to keep our childhood going forever.’

In Nell’s house adjoining the circus buildings, we eat lunch in an inviting sunny room surrounded by flowering geraniums, a piano and an easel, on which stands Nell’s latest painting of a bull. ‘I always have a bull on the go at home,’ Nell laughs. ‘I love this room, it’s where we can all be creative together. My twins [aged nine] will be sketching or messing around making up music.’

We eat lentils, salads, freshly baked bread and homemade soup, served in a random selection of mismatched Emma Bridgewater bowls, all feeling very much like Charlotte’s legacy. ‘I’d say we were brought up by a hippy on lentils and homebaked brown bread,’ Emma says, ‘but that’s because Mum was interested in the impact of nutrition as someone who fundamentally cared about other people.’ During the ’80s Charlotte was a magistrate, interested in prison reform and young offenders. 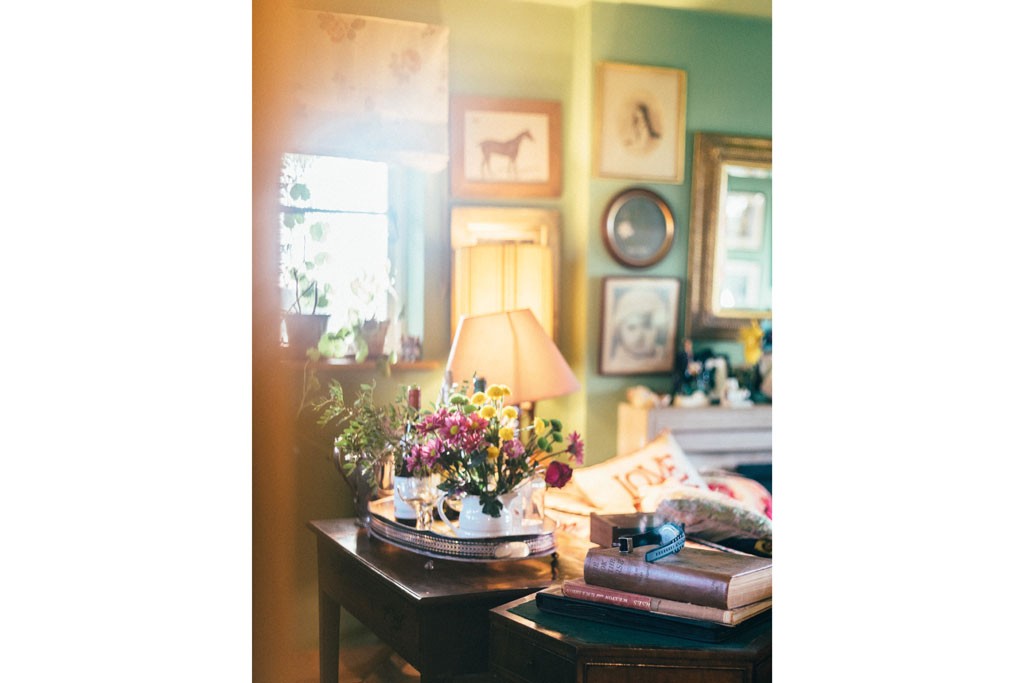 I ask if they are constantly trying to recreate their mother’s world. Clover answers that her childhood home exists in a long- lost, different dimension so she’s trying to find it rather than recreate it whereas Emma says she is trying to rebuild it in a way: ‘I’m always channelling Mum in everything,’ says Emma. ‘Our collective anger and anguish fires me along.’

‘When Mum had the accident we had no home to go back to and perhaps if we had done we wouldn’t all have done as much to create homes,’ says Nell. ‘The traumatic loss of continuity and home was the absolute defining moment of my life. Clover and I have always been looking for home.’

Despite signs of tiredness, about which Emma is touchingly concerned, Nell looks robust and is fulfilled by a phenomenal new surge of creativity. Having always sketched, she turned to painting, with encouragement from family friend and art consultant Amanda Lay and mentor Joe Avery, a fine artist and art teacher, who works with Giffords Circus. Nell’s paintings, vibrantly aflame with colour and movement, depicting horses and circus performers, can now be seen at Into a Land of Pure Magic, an exhibition at London’s Olympia Auctions. There will also be an online auction of her work. 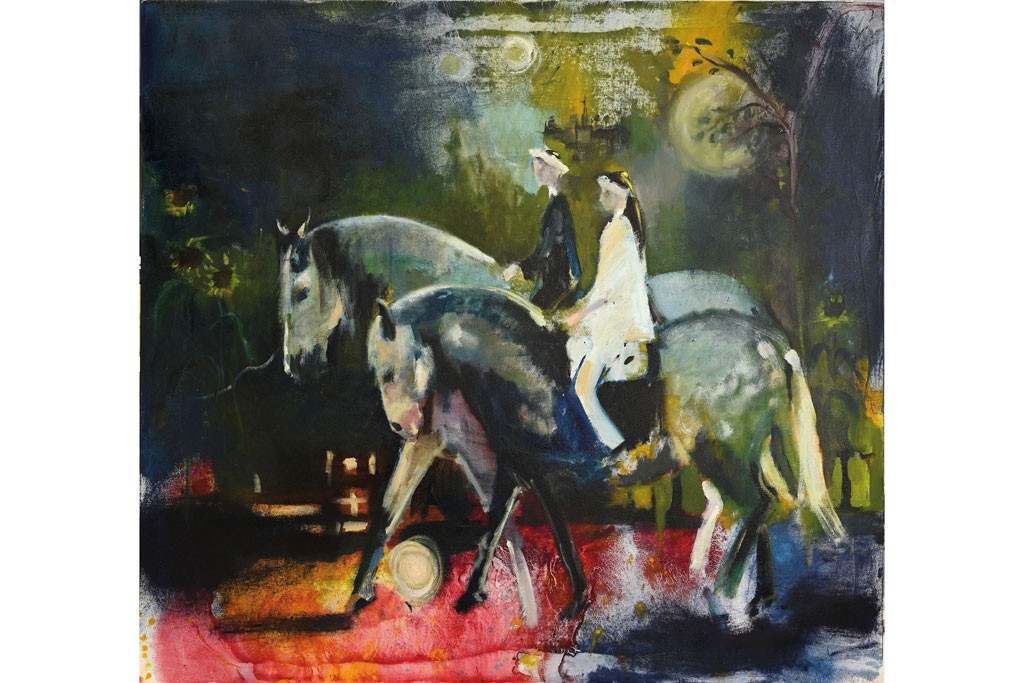 Nell’s passion for painting arose from copying a Picasso painting for the side of one of the circus caravans: ‘I found it quite easy so did another one and soon I was doing about two copies a day in the dark.’ ‘It was extraordinary to watch you charging at being creative,’ Emma tells her. ‘You painted the whole of Picasso’s blue period in a fortnight. You said, “I can’t be thinking about my bad health.” It was fascinating and amazing how you powered forward. Like Mum, you were utterly bold and unselfconscious.’

Says Nell, ‘It came from being ill, not drinking or having a social life. I have more time to paint too, in hospital and when the kids are with their dad [Toti Gifford, cofounder of the circus, from whom Nell is divorced]. I’ve learnt to channel my energy differently and combat stress with radio, incense and painting. I’ve done more than 60 paintings in a year – things turn around so fast in a circus that I’m used to working at a pace.’ 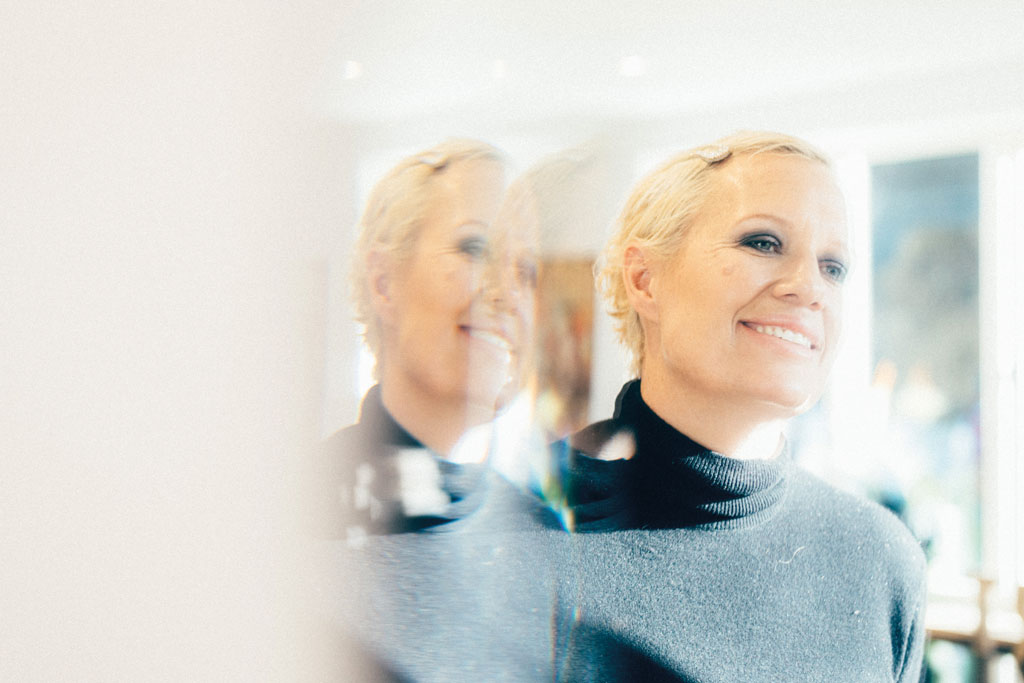 I comment they all seem to charge at life furiously fast. They’ve all written books. Clover river-swims and rides a racehorse weekly. Emma walks daily and makes elaborate quilts alongside her business. ‘I think we’re all really restless,’ says Clover, but when I ask where their wildness comes from, Nell demurs: ‘We’re not wild, we’re driven and on a constant quest.’

‘Nell’s right – it’s more than being simply wild,’ says Clover, ‘it’s about being bold and outward bound. I’ve always loved the people around horses: for Nell and I horses have always been a way into other cultures.’

Clover described her life with horses in The Wild Other and she says, ‘The book put a narrative round my life and helped me understand about how the trauma defined me.’ She’s just finished a new book about motherhood, published this month. ‘People are saying they’ve never read so far into sexual desire, dislike, discomfort. I’m communicating an extreme, difficult experience, which I hope will help others in a similar situation. I’ve found it very consoling and it’s made me feel less alone. With five children I can’t go off round the world, so writing in a deeply confessional way is very exciting and makes me feel fearless.’

It’s impossible not to admire the sisters’ collective resilient ability to overcome all life has thrown at them – death, divorce, separation, illness – with self-deprecating humour. Their talent and success is astonishing but it’s their knack for living and appetite for life that impress me most. Nell’s catchphrase for Giffords Circus is ‘Wilder and More Magical than Ever’ and it’s this zest for the unexpected and different, and the pursuit of a less humdrum, more enchanted reality, that unites and defines them. 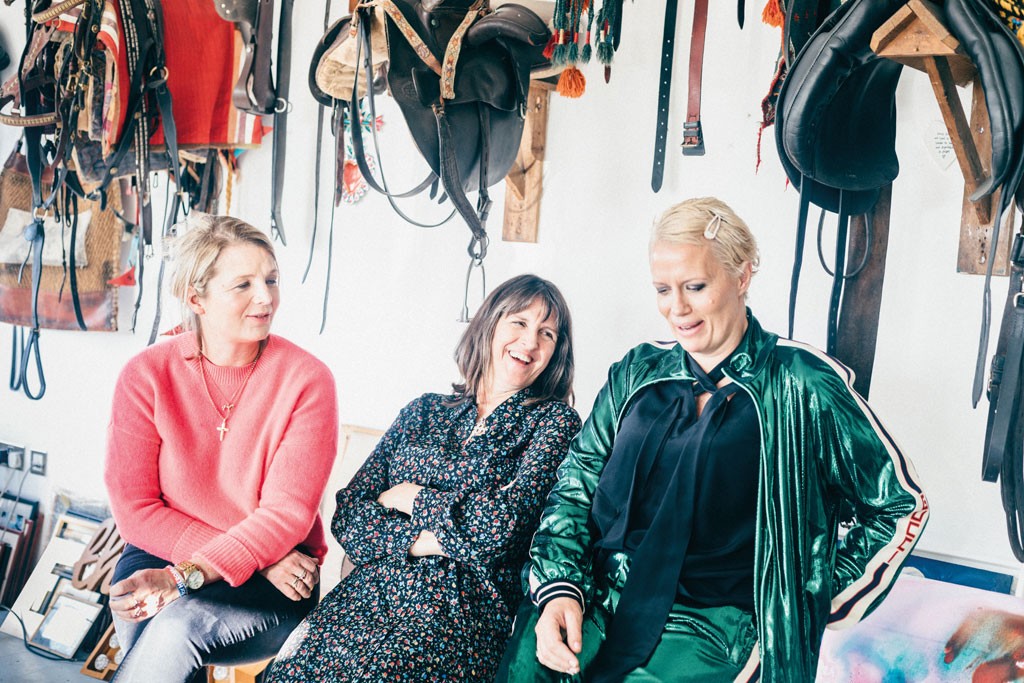 Ultimately it’s not Charlotte’s tragic accident and subsequent death that has shaped them, but her life. Their gloriously imperfect upbringing was a blueprint for how to live and to love, giving them a capacity for joy. They’ve all confronted grief to embrace life with vigorous individuality. How proud Charlotte would be of her three extraordinary daughters and of the lives they are living – and have lived.

Into a Land of Pure Magic will be at Olympia Auctions, 20–27 February, and the online auction will take place 10 – 28 February. Interested bidders will be able to register on the website from 1 February 2020. olympiaauctions.com